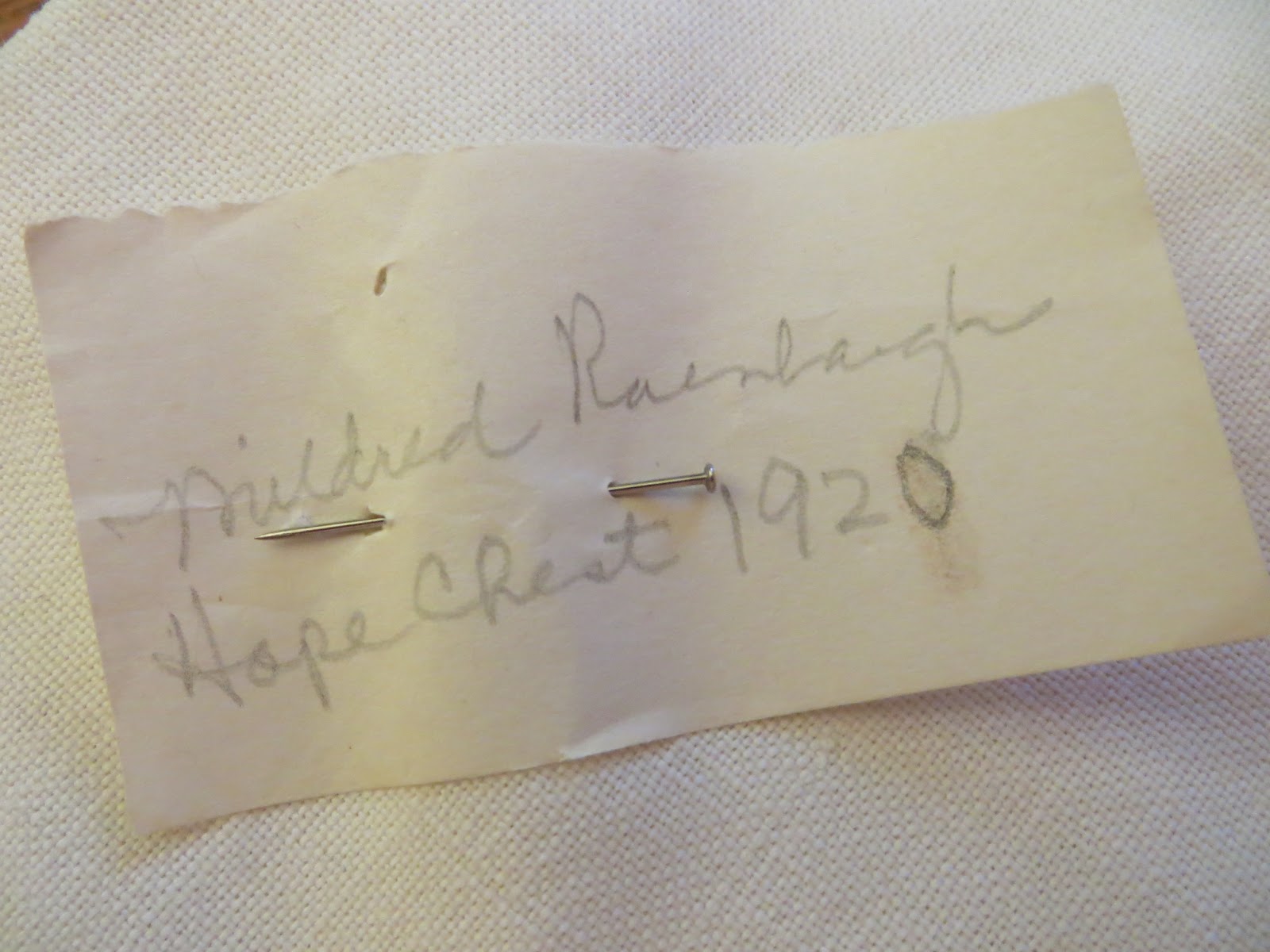 This was purchased at a flea market in Hutchinson, Kansas. The name is Mildred Roenbaugh as best I can tell, although it may be something else. 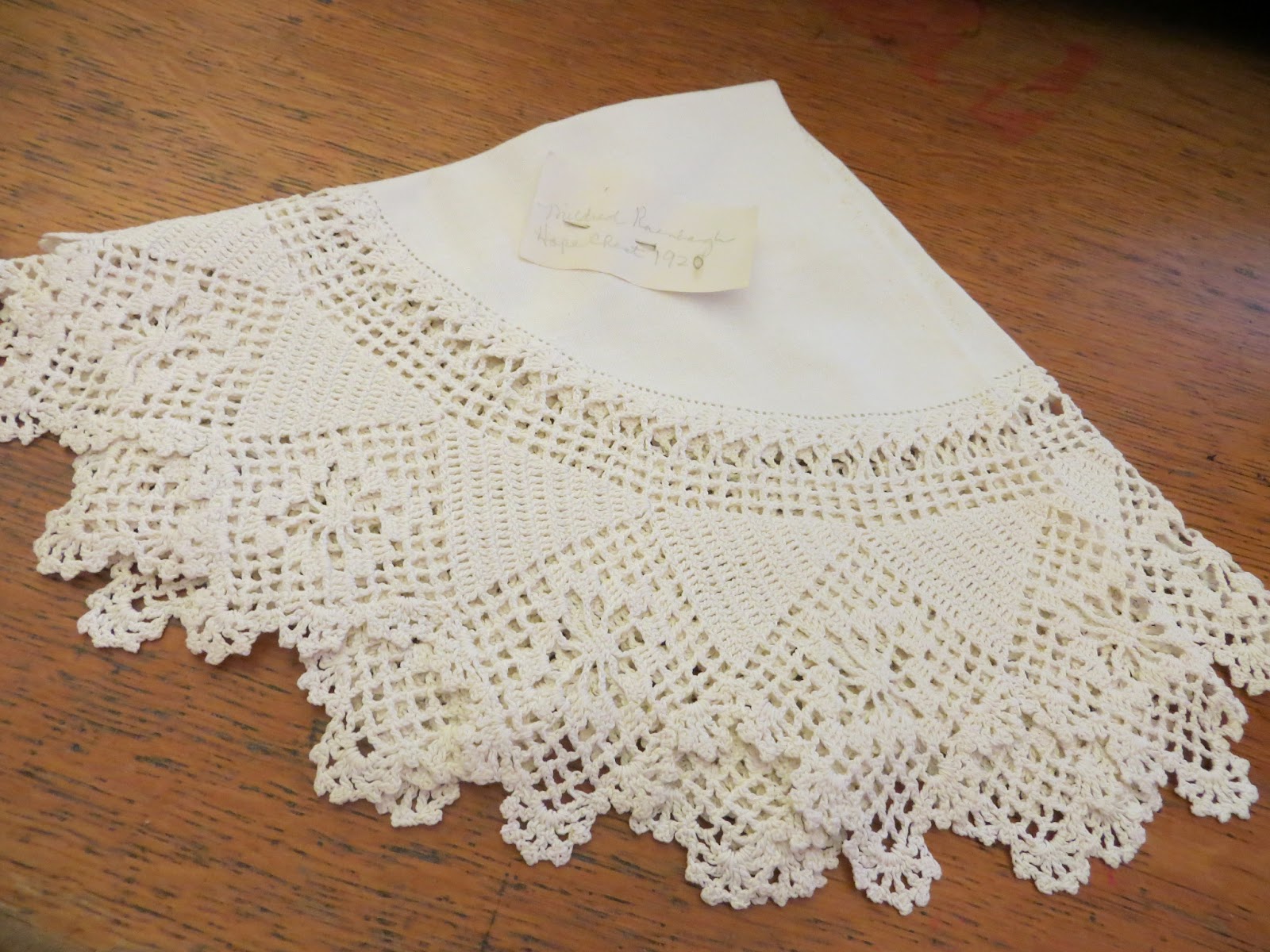 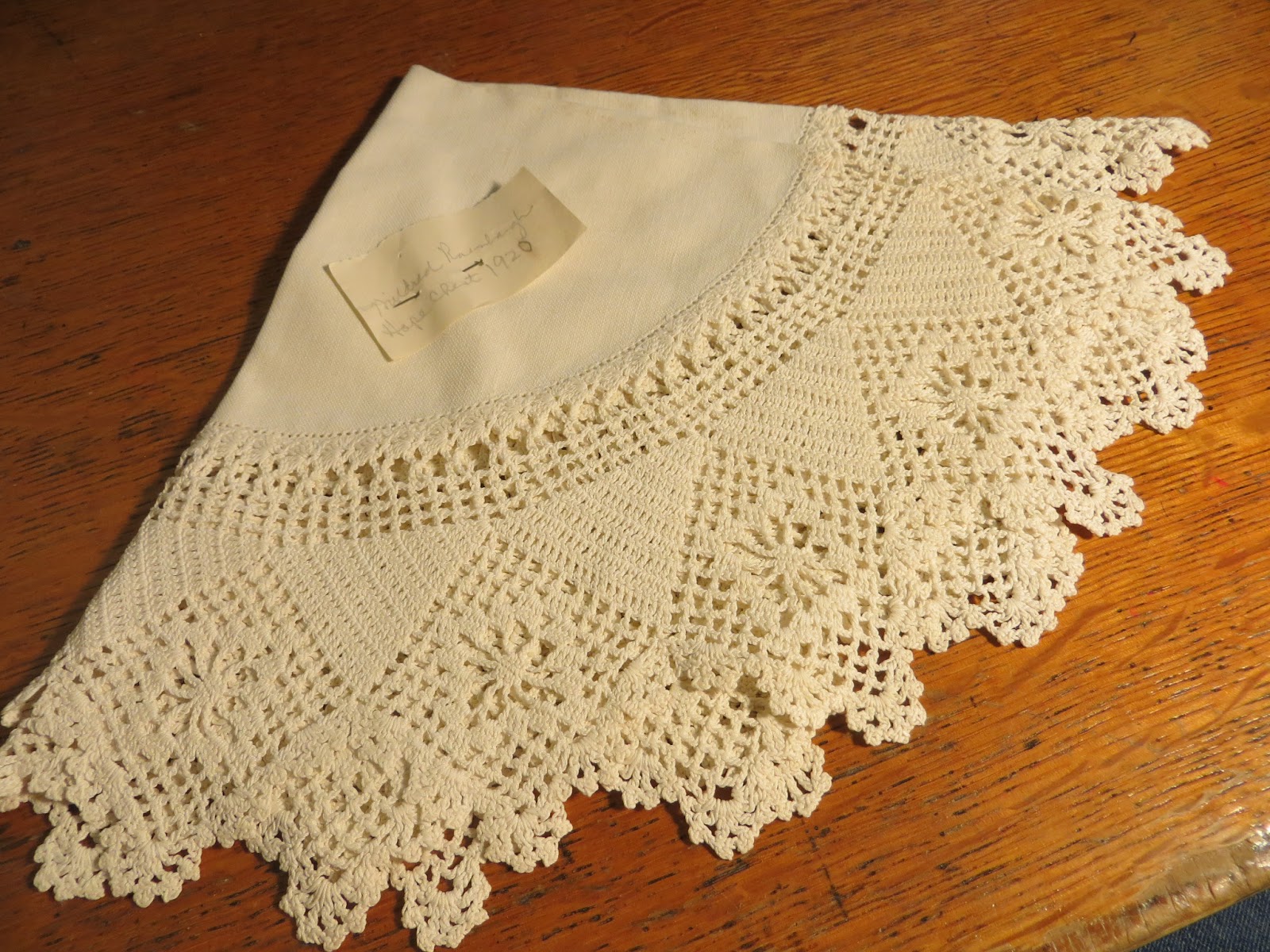 I posted this on Facebook on 4/26/2016 and my friend, Catherine Green, did a little research and discovered the following. I LOVE this!

Interview with Jacob Roenbaugh
November 9, 2009
Conducted in the Roenbaugh home
Interviewers: Joan Weaver and Rosetta Graff
Interviewer: What is your full name?
Jake: Jake Byron Roenbaugh.
Interviewer: Where do you currently reside?
Jake: Kinsley, Kansas.
Interviewer: And when and where were you born?
Jake: Fellsburg, Kansas. 11/06/31.
Interviewer: And what were the names of your parents?
Jake: My mother‟s name was Mildred. My father‟s name was Gordon.
Interviewer: And your mother‟s maiden name?
Jake: Shank.
....
Interviewer: During that time, you were born in „31. What do you remember about the Dirty Thirties, the Dust Bowl?
Jake: That you couldn‟t see anything when it come rolling through. We had lots of rags at the doors and the windows. We walked around with wet washcloths a lot, so we could continue to breathe.
Interviewer: Over your mouth?
Jake: Yes. The house that my folks lived in was moved there when the town of Greensburg folded up. There‟d been a tornado come through there, and they rebuilt part of it. There was no insulation in the house. There was just the siding and then the plaster on the inside. No boxing or nothing. Pretty open, so a lot of that dust and dirt come right on through.
...
Interviewer: Do you remember the Depression at all? Or any effects at all? Again, you were a young person…
Jake: I don‟t know exactly what all we did without. You know, as a little kid you really don‟t know. But we made it. We did without this and that. Mom bought flour and stuff like that in sacks so she could make her skirts or aprons or whatever. She made a lot of the clothes that the girls wore. We Roenbaugh - 5
didn‟t hurt for anything. We were fortunate enough that our health stayed pretty good most of the time. So I guess that‟s the best I could answer that.
Interviewer: That was the advantage of living on a farm. You didn‟t go hungry.
....
My dad couldn‟t work. He was dependent on somebody to do most all of the work. So consequently, I was not very old and I learned how to milk a cow. The reason he couldn‟t work was he had a double hernia. It had been operated on, when I don‟t know, but that made it a little tough in the sense that he couldn‟t ride a tractor either. He couldn‟t pick up anything.
...
Jake: That‟s true. And you know, my dad couldn‟t work, so consequently, I don‟t ever remember not having chores. No matter how old I was. I had a bunch of cousins that lived at Trousdale that they didn‟t have the same…they went to more shows, did more things. I just knew that I wasn‟t going to get to do it. I can remember one time when we were getting ready to move a hog trough. My dad was standing at the fence talking to somebody, and I couldn‟t move it. I had a stick or something trying to pry it with. And I looked up and asked him, I said, “God damn it, can‟t you help me?” And I think that‟s probably what I said, and he did. And it was three weeks before he got over it. He just couldn‟t do it. And I know now what he was, 'cause I can‟t do it today, I can‟t do anything. I can‟t walk very far.
Interviewer: That had to be frustrating for your father.
Jake: It was.
Interviewer: And your relationship with him?
Jake: It was good, very good. He drank a lot of whiskey, but he taught me a lot of things.
Interviewer: So overall, you had a lot of chores, but it was a good childhood.
Jake: Oh yes. And my sisters, I‟d wave to them goodbye. They were always going somewhere with their friends. I was either on the tractor of doing something.

Jake also mentions that his mother Mildred was once badly burned, while he was away at war but he was not able to come home when summoned.   And if the findagrave below is true about Mildred's husband - she was also a widow a long long time - between 1957 and 1993 when she died.

You can see him on video! this interview -
https://www.youtube.com/watch?v=hp5iV_MYKbw